So this week is Spring Break!  Normally if Paul were here we would be off on some cool adventure here in Europe but not this time.  Since Paul is deployed I didn't want to venture too far away from home.  There were several people who invited me places but they weren't really inviting me, they were really just being polite. It's okay though I'm sure I'll hear all about everyone's cool trips through Facebook which I've decided should be called bragbook.  I realized this one day about 2 years ago when I went to update my status on Facebook.  As I wrote my status I realized that I was bragging not only about how low I've gotten my heart-rate through exercise but also how incredibly in shape I was.  As I looked back on other status's I wrote I realized they were all about something wonderful that I had done or experienced or my family had experienced.  I'm not against Facebook.   I think it's a good way to keep up with freinds but I rarely write status's anymore.  That's why I like my blog.  It's really just me journaling a little bit and telling my story of my life here in Europe. It might come across as braggy but it's my blog so I guess I can do that.  Anyway, so yesterday I had to get up at a normal time as Mrs. Hauck our maid comes pretty early.  Since I was up I decided to look and see if Giuliana and I could take a day trip somewhere cool.  I had heard about a museum in the city of Speyer and so looked up how to get there.  I thought it would be way more fun if we rode the train and so I enlisted Giuliana's help to check the train schedule for me.  It appeared it would be a little further than Heidleberg but not much further.  We got off to a late start but walked down to the train station in our village and bought and all day ticket for ourselves.  It would have been even cheaper if we had invited 3 other people with us but since no one was really around we just went ourselves. 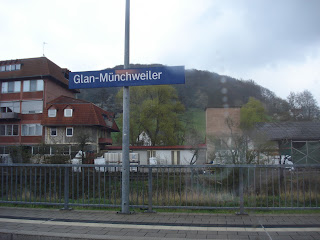 So we started off at our village train station in Glan-Munchweiler.  The train came on time and we were off.  We caught the train at 11:40 and according to our calculations should arrive in Speyer at 1:30. 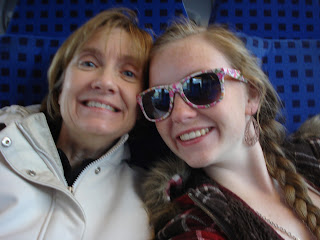 Here we are enjoying our train ride.  We didn't get very far, in fact I think it was the next village over and the train stopped.  It was a scheduled stop and some people got on and then we just sat there and sat there and sat there.  A good 15 minutes went by and I thought, "I could have walked to this village in this amount of time.  Some train worker came by and tried to explain to us what the problem was and it had something to do with a train in Landstuhl which is further up the track.  Finally the train started again but we had lost some time so I knew we wouldn't make our connections in Kaiserslautern.  We kept stopping for long amounts of time at other villages and by the time we got to Kaiserslautern 50 minutes had past.  I told Giuliana we were in it for the adventure so we shouldn't worry about the time so much.  It only takes about 20-25 minutes to get to K-town by car but I kept reminding myself we had lots of time because what else were we going to do with our day.  We looked at the train chart and found our next train and miraculously there was one leaving withing 10 minutes so that worked out really well. 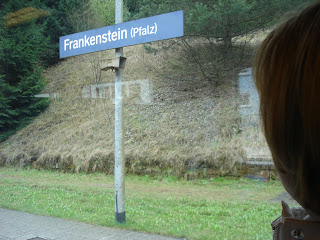 Look at the town we passed.  That would be fun to be in a Halloween costume and get your picture taken with that sign.  I loved looking at the countryside and villages that we passed by.  We had to make one more train switch which turned out to work out perfectly because we only had to wait a few minutes until our train came. 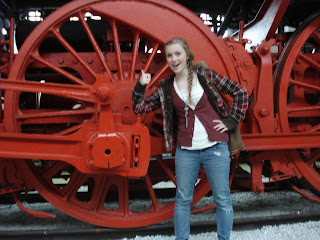 Okay, this is not the train we hopped on!  We finally made it to town of Speyer which is an old town.  We were able to find the bus we needed to take to the museum and it only took a few minutes and since we had an all day train pass it was good for the buses too.  Instead of arriving at 1:30 we arrived at 2:20.  Oh well, the German's usually don't have big delays but on this day they did.  We went into the museum and it was all about Trains, Planes and Automobiles.  Oh yea and Boats and submarines.  Here Giuliana is standing in front of a train that was used in the early 1900's.  The wheels were gigantic and we climbed up and looked inside.  The first part of the train looked like a big flatbed car that housed the coal.  Opposite this car was the place you would throw the coal into the furnace.  It was pretty neat. 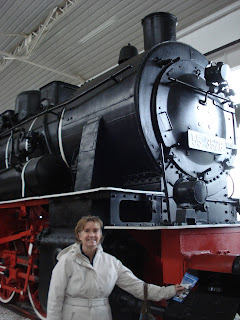 This was a different train I believe used in the 1930's. 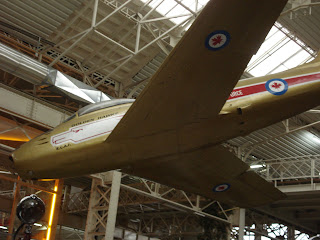 There were lots of planes but I really didn't know what any of them were.  This was some Canadian plane.  I bet Paul could tell me what they are!  I'll just post some of the plane pictures and Paul can try and guess what they are.  Of course I can't tell him if he's right or wrong, but he'll probably know. 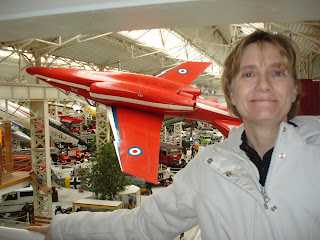 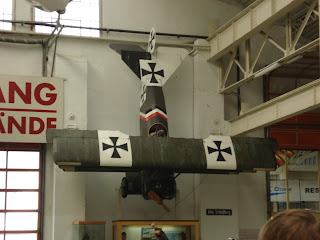 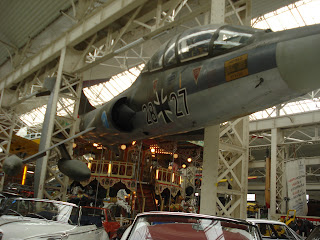 Another German airplane, a fighter I suppose. 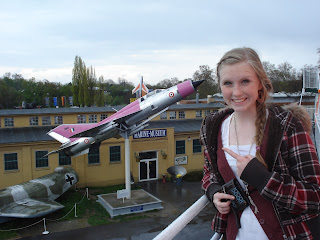 Some kind of pink airplane.  Giuliana liked this one because it was pink. 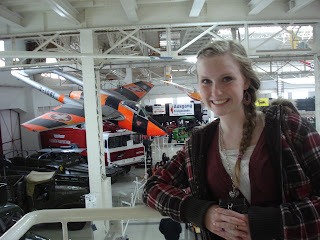 Who knows what this plane is but it looked cool.
I think the airplanes were wasted on us because we really didn't know much about them.  They did have this one Luftansa 747? outside that we got to climb up into and it was absolutely gigantic.  They had this static display propped up at an angle way up in the air and we had to climb up all these stairs to get to it.  When we went inside we could walk the whole length of the airplane, go down to the luggage hold go upstairs to 1st class and see where the pilot sits.  It was pretty cool and incredible. 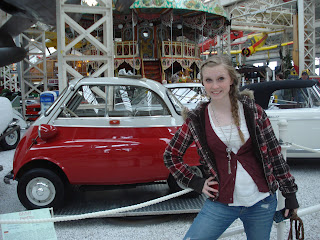 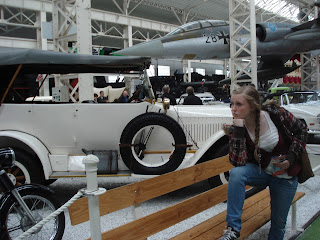 We saw lots of cars from all different eras.  Giuliana wanted to pose in front of what she called, "The first smart car!"  This was actually made by BMW as I believe they started off making motorcycles but were trying to cross over into automobiles.  I think this car used a motorcycle engine to power it.  The cars were all so beautiful but I don't know much about cars either.  We just liked the way they looked. 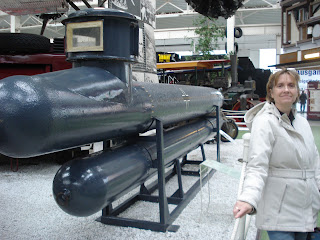 This was a suicide sub that the Germans used during WWll.  I had never heard of such a thing but I guess the guy was in the sub that was attached to the torpedo below.  Apparently their chance of survival was slim but I think a few did survive. 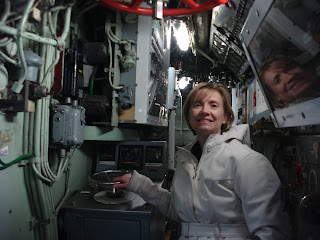 Here I am on the inside of a German U-boat from the 1960's.  We walked through this sub and it just made me think how horrible being a bubble head must be. 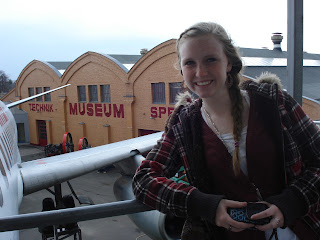 We climbed up to all the static displays that had something to offer.. Giuliana and I climbed up this one that had a big metal tubular slide attached to it.  She had to bring up a blanket to sit on when she slid down.  She said it was the fastest slide she has ever been on in her life.Finally we went into the last building and saw a few cool things. 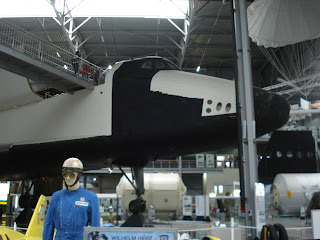 Here is the Russian version of the Space Shuttle.  It's called the Buran and this shuttle was used for atmospheric approach and landing tests.  We got to look inside of it and the thing is massive.  By the way, it looks to me to be identical to the US Space shuttle. 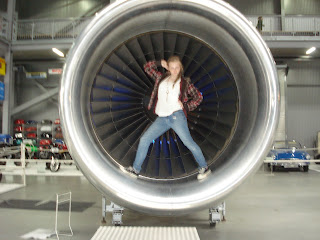 Jet engine.  I told Giulana to climb inside as it's probably the only time she would be able to do that. So you can see there was a lot to see at this museum.  We walked a little bit through the shopping district of Speyer afterwards, bought ourselves some dinner to go and then headed back to the train station.  We had an uneventful trip home and although there was another delay on the train it was short lived and we made it home in about 2 hours.  A good day out on Spring Break!