Although Spring Break is actually over, I have to say my Spring Break just  arrived when my sister in laws and my niece arrived into town last week.  Robin, Elaina and Rachel graced our household for about a week and it gave me a chance to relax and enjoy my life a little bit.  The week before they came was Giuliana's Spring break but we really didn't do much and I felt kind of sad that Paul wasn't here to do something with us.  We did manage to make it to the museum in Speyer but that was about it.  When Rachel, Robin and Elaina arrived, I tried to think of something fun to do everyday.  The weather was pretty uncooperative but when living in Germany, you can't stop from doing something because of the weather!  The trip I'm highlighting today is our trip to Burg Eltz.  What is Burg Eltz you may ask?  Well basically it is one of the best preserved castles in Europe.  We jumped in the car and drove about 2 hours before finally arriving to the location.  I had seen pictures online of this castle and when we arrived I kept looking around for it.  From the pictures I thought it was perched up on a hill but actually it's just the opposite-it's perched down in a valley.  We had the choice of either taking a shuttle down to the castle of walking.  I'm pretty cheap and since I hadn't exercised that morning I voted to walk.  The shuttle was a little pricey for me and since the weather had cleared up it was a beautiful walk.  The walk was all downhill but we got some good pictures. 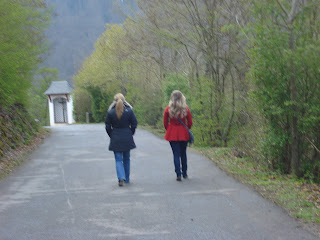 Here's a picture of Elaina and Rachel walking down the long path toward the castle. 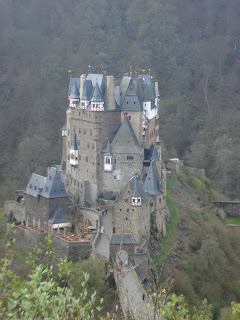 Here is the first view we had from an overlook.  It's pretty stately looking. 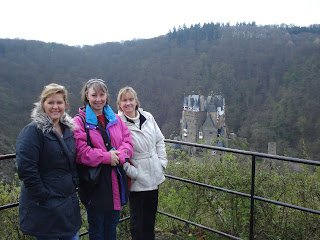 Elaina, Robin and I--proving that we were really here.
We continued walking down the path and then had to stop again for some good photo ops. 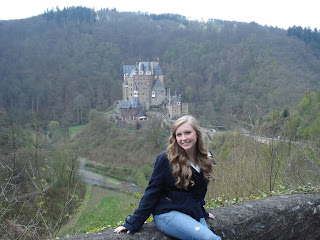 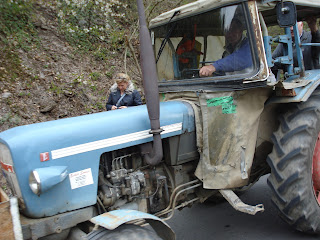 Here's the shuttle that was going to take us down.  Hahahaha, just kidding but we did have to watch out or the tractor might have run us down. 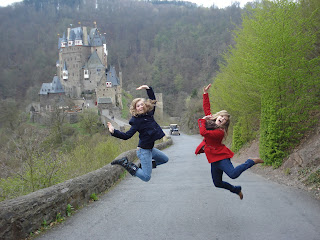 I don't know how many times we had to take this picture until we got a good one of both Giuilana and Rachel up in the air.  Nice boots Giuliana has on. 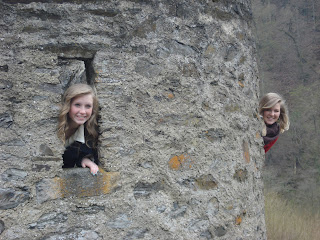 Rapunzel's Rapunzel's, let down your hair! 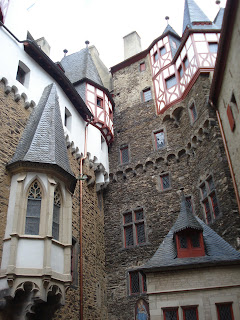 Inside the courtyard of the castle.  We signed up for an English tour and stood around this courtyard waiting for it to begin.  Unfortuately they did not let us take any picture of the inside of the castle but it was pretty neat had had some furnishings that were interesting to look at.  This castle is still owned by the Eltz family and has been for 35 generations. 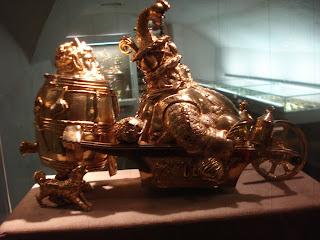 Giuliana took this picture in the castle museum.  She thought it was hilarious of this fat dude being pushed in a wheel barrow  and is being pushed by some horned goat man. 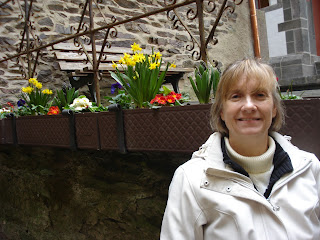 Here I am standing in front of some freshly planted flowers in the courtyard.  We enjoyed our time at Burg Eltz!