A few weeks ago, Giuliana had to participate in Victorian Day.  This is a day she was not supposed to use technology such as computers, cars, TV's, radio, or dishwashers.  She was supposed to spend her day doing things that were being done in Vicotorian days.  Well, I have a vague idea of when the Victorian Age was and I believe it was most of the 1800's and perhaps even early 1900's.  I suppose Giuliana is studying about Britain because when I think of the 1800's in the US I think of the civil war, I think of the wild west, and I think of expansion. I don't think about refined people in refined clothes sipping tea and visiting manors for weeks at a time.  (Yes, I've read Pride and Predjudice!)  Anyway, if you have been reading my posts you saw how Giuliana was dressed as I posted some pictures of her.  I thought it would be fun to post the video she made of her Victorian Day.  She handed this video in instead of writing a report about it and her teacher loved it.  I didn't realize I was featured in it until it was a completed project and she showed it to her class!  How embarassing, I'm actually in my pajamas but luckily my face isn't featured.  Enjoy!


So speaking of Victorian day, I actually own 2 pieces of furniture that come from that time period.  The first one that many of you have seen is my grandfather clock.  I bought this at an antique store it it comes froms Leed's England.  It is approximately 200 years old, with a hand painted face.  I really love it although it doesn't keep excact time I often look at it and wonder whose house it was in and who owned it. 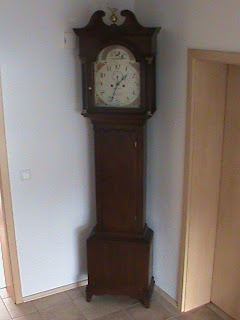 This second piece of furniture is not from England at all so technically it is probably not "Victorian".  But it comes from the same time period.  This piece of furniture is called a "Fire Trunk"  This furniture was used in a mill and the top of it can lift off like a trunk.  You can see the handles on the side.  So if there was a fire they didn't need to get the whole piece out.  They could store their most important documents on the top half and lift it off the base and make a run for it.  Anyway, I'm just doing my part in honor of Giuliana's Victorian Day! 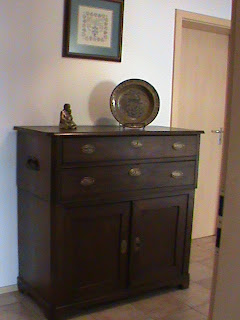