For Thanksgiving 2011 we decided to go to England instead of doing the traditional turkey dinner.  Here are the highlights. 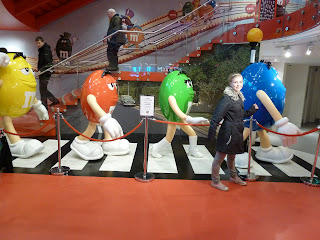 Okay, so it's not the Beatles but it's the closest we got to Abbey Road.  We did however stop off at the British library and see the Beatles exhibit there.  The British Library is pretty amazing in that it has a display of the Magna Carta, the Gutenberg Bible, original writings and drawings displayed by Leonardo DiVinci and so much more!  It's an incredible place to visit not only because it's free but it's full of history.  I'm a little embarrassed to admit my favorite thing to look at was the Beatles exhibit.  They had their music available to listen to on headphones too! 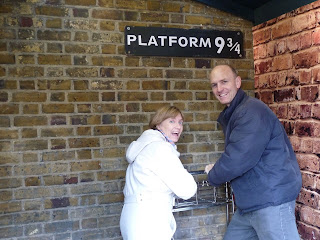 Yup, Paul and I decided to take a little side trip to Hogwarts.  Good times. 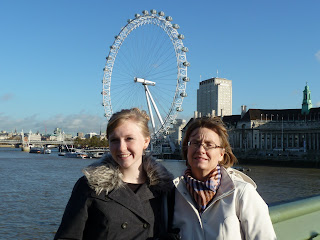 Here we are in front of the London Eye.  As you can see it's blue skies above and although a bit windy a good day to take a spin on it.  So we did.  It took about 30 minutes to make one rotation around but it was worth the money because you could see for miles and miles.  Unusual weather for London but we were happy it cooperated for us. 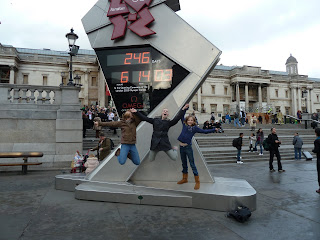 Here you can see Giuliana and her friends jumping for joy because this clock is ticking the time down until the London Olympics.  Behind the clock is the National Gallery and we popped in there for a few minutes and saw some amazing Monets and this historical painting below. 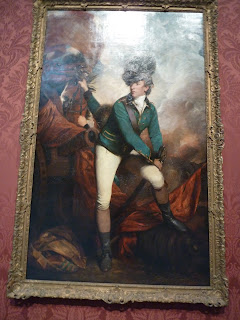 Paul was so excited when he saw this original painting.  I think he used to teach about whatever this even is depicting in his History Class at the AF Academy.  Sadly I do not know what it is all about. 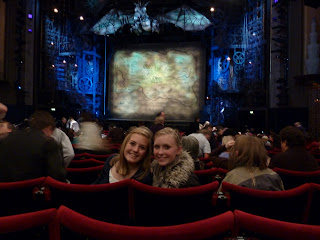 Giuliana and her friend Allison eagerly awaiting the start of Wicked! 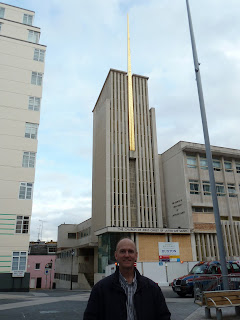 We found this church building as we were walking to the Natural History Museum.  It is either being razed or renivated.  I'm not sure which because we saw signs that said both.  You can see it looks like there are offices attached to the church so we are not sure what the church used this building for.  Maybe it was the mission office at one time.  Who knows. 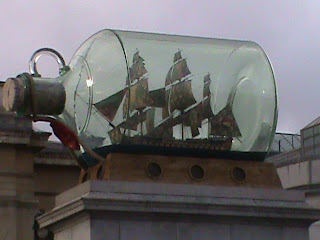 Check out this huge ship in a bottle.  It was pretty cool looking and it was by the Olympic countdown clock. 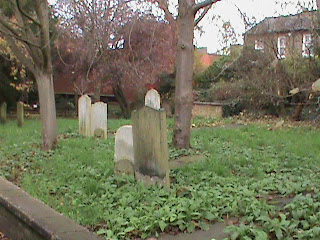 This is a super old graveyard we would pass every morning on the way to catch a train, and then walk by it at night when we were going back to out hotel.    It was pretty scary at night but I loved looking at the names and dates of the people buried there.  There are some really old dates on those tombstones. 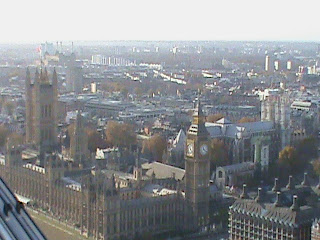 Here's my last picture.  Yes, we did see all the historical sites too and so here's the only picture of a touristy site.  I figure everyone has see the historical things a million times but thought I better include at least one picture so I have a record that I really was in England.  This picture was taken from the London Eye and you can see Big Ben, Parliament, and West Minter Abbey.  These are beautiful sites and I thought them particularly beautiful at night all lit up.  Unfortunately, I didn't take any pictures at night.  I'm hoping to go back as England is now one of my favorite places of all time!
Posted by Yvonne at 10:34 PM