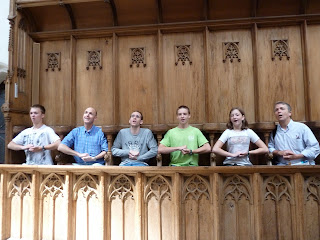 We had a great summer and we were happy that we had family members who came to visit us this past summer. This picture we took while Mark and Robin and family came to visit.  We went to visit a city in Germany called Rothenberg and went into a cool cathedral.  I thought this was a great picture of everyone singing in the choir seats.  I'm sure we weren't supposed be in those choir seats but I thought it made for a great picture. 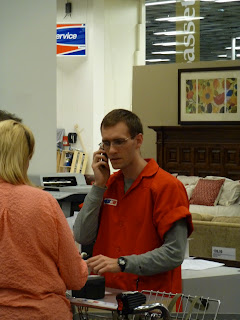 When Bryan came home from BYU we made him get a job.  He was not exactly thrilled about doing that since he gets some ROTC pay every month after field training.  He worked for about 2 months at the BX in the furniture dept.  He hated the job but it paid for his imac he got right before school started.  Here he is, hard at work listening to someone complain to him on the phone. 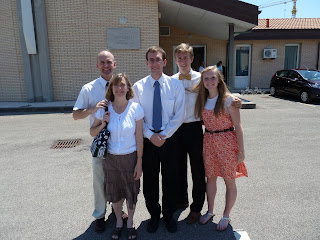 Right before Bryan left for field training in Alabama we took a quick trip to Italy to visit his old mission.  We took our first stop in Sardenia and attended church at the nice building they have there.  It was a really small branch but the people were nice even when I couldn't understand what they were saying. 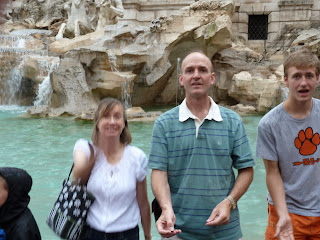 From there we went to Rome and had to throw in our coins at Trevi Fountain.  It was raining and so I look a little drenched in this picture. 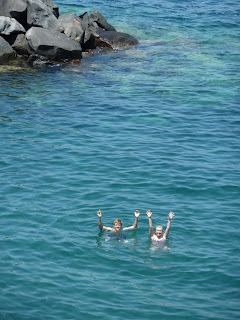 From Rome we headed south to Naples and then took a day trip to Sorrento.  Giuliana and Spencer had to try out the swimming and the water was beautiful.  Sorrento is a nice little town and are know for their inlaid wood products and I think ceramics. 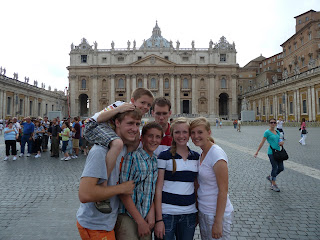 We met up with the Adams family in Rome and I think this is St Peter's cathedral, Vatican City.  They were a fun family to be around and of course we went inside to see the Pieta.  The girl next to Giuliana is the girl Spencer took to Prom this year. 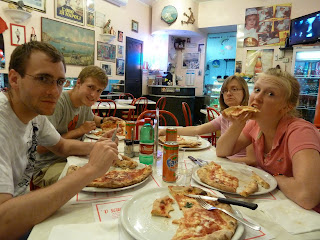 Back to Naples.  Eating Pizza Margarita.  Yum Yum, one of the best things to do while visiting Napoli! 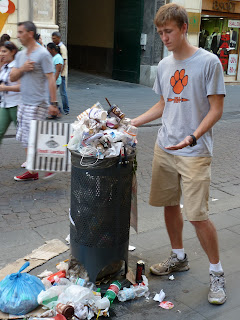 This is a typical site in Naples.  People gingerly balance their trash until it can go no higher and then it tumles to the ground, and then people start the exercise all over again. 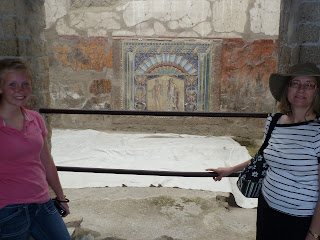 This is Ercolano.  It's like a mini-pompeii except the art work was preserved magnificently from the ash that covered it up for centuries.  They are still excavating parts of it and there is even original wood.  I thought it was amazing. 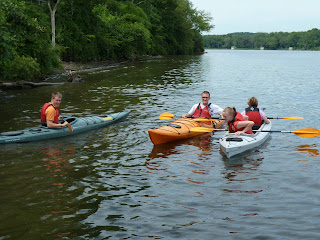 In August we took a trip to the States.  It was a little scary because we were flying Space Available and we weren't sure where we would end up.  We actually ended up in Maine and so drove down to NY to visit Mom and Dad.  One of the activities we did was kayaking on the Mohawk River.  That was a lot of fun and I think we will do that again next time we visit. 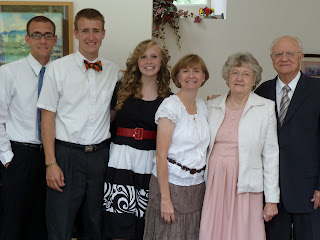 Here's a nice family portrait, except we are missing Paul and Clint.  I suppose Paul is the one taking this picture, and Clint, well, he's having fun in Taiwan.  Bryan just completed field training and met us in NY.  He got new glasses too! I like this picture, although I have a sneaking suspicion that Spencer is standing on his toes. 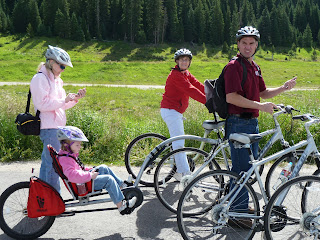 From NY we were able to secure buddy passes on Jet Blue, thanks to Bill and Elaina.  We were trying for a flight to Utah, Nevada or Arizona.  The only flight that had extra seats was Nevada so we cashed in on flight 777 to Las Vegas.  We drove to Utah and stayed for a day or two and then went to Colorado to visit with Dan and Laura.  They took us on a bike ride down Vail Pass and it was really enjoyable since it was all downhill.  I guess it wasn't much in the way of exercise but I liked it. 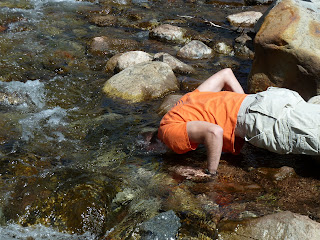 Sometimes we would stop along the way.  Spencer decided to dunk his head in this river which started a trend.  Pretty soon, everyone felt the need to dunk their head in the river.  I refrained. 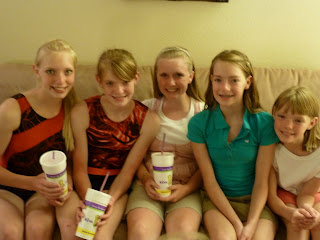 The next day all the girls except for Selina had an ear piercing party.  If you look closely you can see all the little earrings in their ears.  Christina was sad the entire time the girls were getting their ears pierced because Laura told her she wasn't old enough.  Christina cried and cried and just when all hope was lost, Laura changed her mind. Chirstina was all smiles after that. 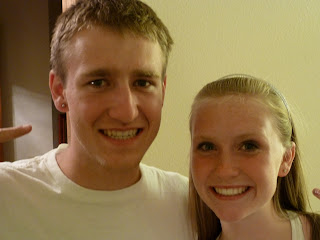 Not to be left out, Spencer got his ear pierced as well.  Hahahaha!  Just kidding.  He put some magnetic balls on his earlobes but they look real!
Posted by Yvonne at 6:12 PM