Wow, has it really been 4 months since I posted anything.  That is incredible to me since I was so busy from January to March with doing seminary lessons everyday and yet I still seemed to find time to work on my blog.  Now that seminary is over, I seem to be busier than ever and I never quite feel the motivation to post anything new.  I have done quite a bit between March and July but it makes me tired just thinking of where I can find pictures of all the events and cool places I have been.
I have been reading some books these past couple of months.  One book that I highly reccommend is the book-"Nothing to Envy".  It's a non-fiction book that follows the story of 3 North Koreans and how they were able to get out of North Korea.  It's an interesting read and it made me think that unifying North and South Korea will pretty much be impossible in the long run.  I don't even think South Korea wants to unify because the North Koreans that are able to get out are kind of difficult to work with and a drain on the South Korean society.  I honestly can't understand why there hasn't been a civil uprising in that country-it's like all the people are sheep.
The other book I read was another non-fiction book called "The Glass Castle".  After reading this book I staarted wondering how much of these non-fiction books really tell the truth.  I start thinking that perhaps the author is embellishing stories just to be more shocking to the reader.  Anyway,  The Glass Castle is about this totally dysfunctional Mom and Dad who have 4 kids but can't seem to ever stay in one place as the Dad is constantly unemployed and the mom is just nuts, (in my opinion)  Again, it's an interesting read, but I found many parts of the book hard to believe because if the events are true, those parents should have been arrested for neglect.
Non-fiction is not the only thing I read, I've been reading the Charles Dickens classic, "Little Dorrit" for almost a year now.  I'm more than 1/2 way through and I like it but it's slow going.  Charles Dickens spends a lot of time describing things and so when I finally get to a conversation in the book, I'm excited as I know the story will go forward.  I've always liked Dickens as I think he could really read people and describe them perfectly.  The people Dickens describes are the same types of people you can find today, in this day and age and I find that humorous. 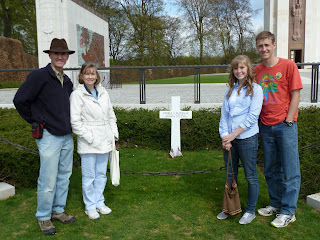 Along with the book reading, our family has taken some pretty good trips.  We took a trip to Luxembourg in April.  Here we are at Patton's grave.  Patton was not originally placed in the front of the cemetery, because the army believes after one dies you are just like everyone else and you don't get a "special" spot to be buried.    So they buried him among the troops.  The problem with that was, everyone wanted to find Patton's grave and so pretty soon the cemetery had a really worn down muddy spot around his grave which ruined the grass and the graves around Patton's.  At a certain point, many American's wanted their loved ones repatriated to the USA and so many of the bodies were sent back home.  That meant they had to move alot of bodies so that the cemetary looked good.  While in this phase Mrs Patton asked if Gen. Patton's could be relocated to the front of the cemetery since Patton loved his troops so much and would want them to know he would lead them no matter what.  The army said "No Way", but that they would give him a spot in one of the aisles so that would help not make such a big mess around the other graves.  Well, Mrs. Patton was disappointed in their decision so she called upon her good friend-Charlotte, Dutchess of Luxembourg.  Charlotte did her magic by basically threatening to move Patton to the National Cathedral instead, so the Army allowed Patton to be moved to the front of the cemetery.  It's a pretty cool story.
The second picture here is a picture of us down in the tunnels below luxembourg.  These are called the Casemates.  There was built for underground defenses in 1644.  The Spanish built them and then I think the French extended the tunnels.  It was fortunate they were built as the people in Luxembourg were able to use them during WWII as bomb shelters.  The tunnels are pretty extensive and we only saw a small part of them. 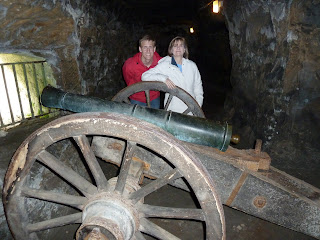 Here I am along with Spencer and we are in the casemates by a big cannon.  It was pretty damp down there.
Posted by Yvonne at 6:38 PM