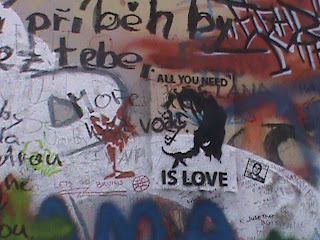 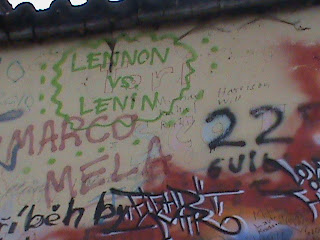 This is the John Lennon wall which came about when John Lennon was killed.  The communists ruled at that time and so it was dangerous to voice your beliefs and opinions.  Many people did so anyway at the risk of being arrested. It still stands today and there are lots of remnants of candles nearby. 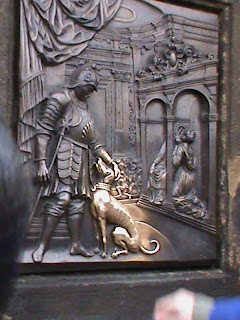 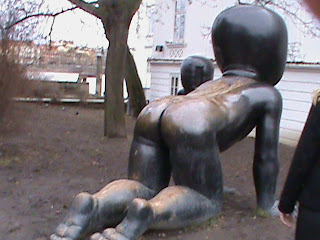 Ok, I'm not really sure why there were a bunch of naked baby statue but there were about 3 or 4 of them by the river and boy were they strange! 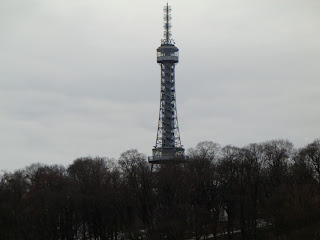 This was some big antenne that the Czech's purposely made to look like the Eiffel Tower. 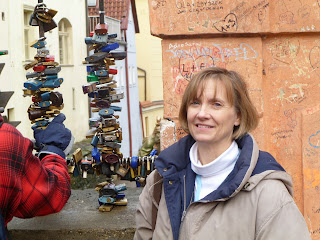 These are locks that people put on this fence when they get married.  I'm at the end of the fence but there were hundreds of locks attached to the bars of this fence. 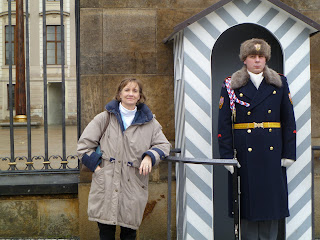 Giuliana wants to know why this guy is guarding an oversized dog house. 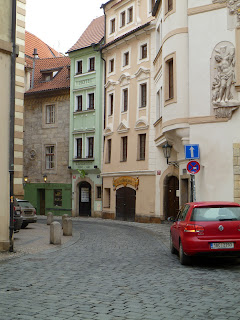 The narrow green building is the smallest hotel in Prague.  I think they can accommodate 6 people.
This is a giant metronome.  There used to be a huge statue of Stalin  there but after Stalins crimes came to light, the gov't blew it up with dynamite in the middle of the night.  When they were trying to figure out what statue to replace it with, they decided not to put a person up because they thought that in time that person would become corrupt also.  So they decided to construct a metronome and it's pretty cool because it really works.
Anyway, I'll end the quirky pictures now.  I'll soon put up the more famous sites in Prague.
Posted by Yvonne at 4:02 PM No comments:

Here is a short video of the fireworks that went off at midnight here in our little village of Glan-Munchweiler!  I'm pretty amazed that all the locals had pretty good fireworks.  Not only was everyone shooting off fireworks but the church bells were all ringing although that's hard to hear in my little video.  We lit a few bottle rockets, sparklers and firecrackers but the best show was right on our back balcony.
Posted by Yvonne at 12:35 AM 1 comment: